Mimic (or ‘Meaningful Music in Health Care’) is an artistic project that takes place within the context of health care. The Mimic team performs and improvises music in hospital wards in order to connect with people in a meaningful way and to improve the standard of care and the quality of life.
Project features:

Mimic started as a joint research project between the University Medical Center Groningen (UMCG) and the Lectorate for Lifelong Learning in Music at the Hanze University in Groningen. The UMCG was interested in researching the effects of live music on post-operative patients, in particular elderly patients. The Lectorate wanted to establish a new practice for professional musicians in a hospital ward, and to research what this practice could potentially mean for health care professionals and musicians themselves.

Between 2015 and 2017, two so-called ‘pre-pilot’ projects and six pilot projects were conducted in the UMCG, in which a team of three musicians performed music every morning on a surgical ward for six to seven days. During these sessions, patients were monitored extensively while health care staff and musicians were observed and interviewed.
In the summer of 2017 two extra four-day projects were organized in the UMCG in collaboration with the Peter de Grote Festival Groningen. These initial projects were extremely successful. The many meaningful and significant moments experienced by the musicians of these initial projects lead them to establish the ‘Mimic Muziek foundation’ – an organization of professional musicians especially trained to perform Mimic projects. In addition to continuing Mimic projects in the UMCG, the foundation is looking to expand Mimic to other hospitals in the Netherlands. 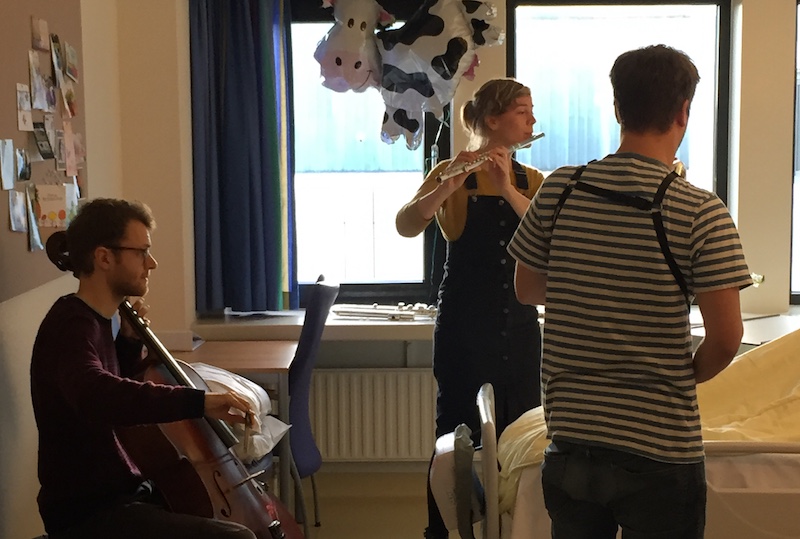 Mimic uses a mix of repertoire and improvised music.
The repertoire is a varied selection of pieces arranged for three musicians (at times also duo or solo) ranging from Bach, Mozart and Bartók to the Beatles, Andre Hazes and Coldplay. These pieces are all performed from memory and at the highest possible artistic level. Because there are no music stands with sheet music, there is a direct communication between musicians, health care staff and patients. Our team performs this wide variety of pieces in order to establish connections with as many different kinds of people as possible. We also encourage people to connect to certain types of music that they may not have previously heard.

In addition to our existing repertoire, improvised music is a major tool in our musicians’ toolbox. In these instances, the musicians create a piece especially for one or multiple persons in a room with the goal of providing patients with a feeling of inclusion and ownership. Often the musicians use patient’s verbal input to feed into the music: the patient might for example be asked to describe ‘a landscape that they would like to be in right now’. Based on the response, the team will translate this image into an improvised piece of music.
Below are a few examples of potential situations:

One of the most important aspects of this practice is the flexibility of the musicians which allows them to react musically to different events in the moment.

Non-verbal input also plays an important role in improvisations – for example, a patient might be unable to speak or is feeling too weak to provide input. In this case the team can decide to perform an improvised piece of music in which, for example, one of the musicians takes a melody that reacts to the patients’ physical behaviour. Are their feet moving? Is their face changing expression? Are they adjusting their position? The musicians’ freedom of improvisation allows them to react to these kinds of signals in order to find non-verbal connections with patients.

With some patients and health care staff, the Mimic team might use a conductor’s baton to create a joint improvisation. This is a very powerful tool to give a person a sense of immediate ownership over a piece of music and over the moment. Together ‘the conductor’ and the musicians improvise a piece of music. The conductor is encouraged not to ‘keep the beat’ but rather to ‘paint the music in the air’ using the baton. Subsequently, the piece of music becomes a musical exchange between the conductor and the musicians that contains a mix of leading, following and ‘letting things happen’. The prominence of a melody or texture, as well as establishing an atmosphere, are of great importance in these improvisations. The atmosphere can vary drastically from bright and joyful to quiet and reflective.

The music is adapted completely to the situation in the room, to the condition of the patient(s) and to any member of the health care staff that are present.
By using a combination of repertoire and improvised music that is tailor-made to the situation, the Mimic team tries to create meaningful musical moments for everyone involved. This is the ‘Person-centered Music Making’ process that sits at the core of the Mimic practice.